THE SECRET HISTORY OF HISTORY

Once upon a time, the Anunnakku enslaved mankind. They reshaped human consciousness to leave initiative, creativity, and inspiration under their control, in a separate part of the mind. By redesigning our language, and perhaps even the linguistic-perceptual centers of the human brain, they placed everything we could say or see under their control. They reinforced their controls with memes: belief structures (analogous to genes) that spread and reproduce throughout human societies. Their agents, the inhuman (or superhuman) šedu, became the overseers of mankind, a mankind programmed by word and faith to believe the šedu, and to believe the Anunnakku codes in our “subconscious.”

Somehow, a small group of humans rebelled. Perhaps a šedu went rogue and used “his” humans to rebel against the Red Kings, accidentally aborting their programming. Perhaps one of the šedu took pity on us and freed us. Or perhaps even the Anunnakku weren’t perfect, and their control of us broke down as the memes mutated unpredictably and as humanity scattered across the globe and built thousands of different languages and cultures. At any rate, the rebels succeeded, somehow, in triggering a massive reality quake that overturned history itself, leaving a new past in its wake.

In the new history, our history (called “History A” by Project SANDMAN), this Ontoclysm happened in 535 A.D. Everything before that date never really happened; it is a screen memory, a delusion, a scrim created by the global human subconscious. Our history books describe guesswork built from those false memories and from ruins twisted and splintered by the reality quake. The mighty Empire of the Anunnakku vanished into a thousand fragments. Where that Empire rested longest – Mesopotamia, Palestine, possibly Greece or India – its imprint remains visible, if distorted.

The century after 535 was almost a global Dark Age: The Byzantine Empire lost a third of its population in the Plague of Justinian, Rome lay in ruins, China and India descended into chaos and civil war, and even Teotihuacán and the Maya states collapsed. Civilizations vanished entirely: the Tocharians in Asia, the Garamantians in Africa, the Himyarites in Arabia. Barbarian tribes such as the Avars and Uighurs suddenly appeared as if from nowhere. Famines and storms swept over the world. These events were aftershocks from the reality quake, the result of a global population maniacally searching for direction and order after the eclipse of their subconscious “gods,” the Anunnakku. 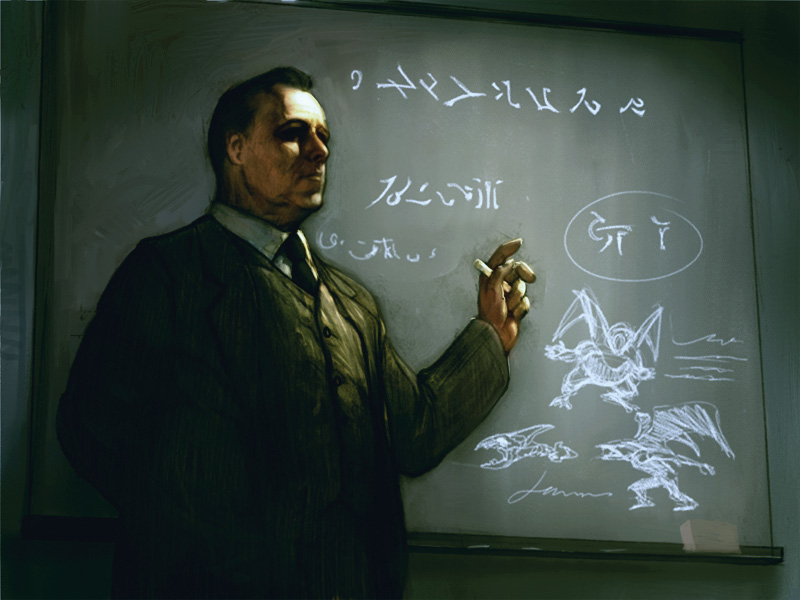 In 1888, a small coterie of scholars in the British Museum launched an expedition to the banks of the Tigris River to settle some major discrepancies in the archaeological record. Their shovels unleashed horrible creatures, which only the fortuitous use of the expedition’s dynamite supply defeated.

The expedition’s sponsor, Alonso Braidwood, 17th Lord Braidwood, used his fortune and government connections to assemble scholars, soldiers, and Freemasons from all corners of the Empire. His eponymous Foundation (under the cover of an archaeological research society) compared other reports from around the globe with the bizarre evidence brought back from the Tigris.

Archaeologists dug at Babylon, and Angkor, and in places never reported to the public. Curators built up quiet armories of inexplicable weapons: the Shield of Achilles, a strange magnetic crossbow found in a Ceylonese tomb, smoothly carved stones that revealed invisible presences, and more. Librarians deciphered codices in unknown languages, and transcribed the rantings of madmen found in certain Arabian ruins.

Slowly, after many more encounters with creatures irrupting into our present from a vanished history, the Braidwood Foundation pieced together the truth. Much as an earthquake leaves fractures in the geological strata along its fault line, the reality quake left many discrepancies in the archaeological record, from the age of the Sphinx (hydrologically dated to 6,000 years before the earliest possible culture could have carved it) to the 250-year gap in the strata above the Mycenaean city of Tiryns. All of these fault lines pointed to the year 535 A.D. as the “ontocenter” of the great cataclysm that thrust our own history (History A) onto the surface of reality, and buried the history of the Anunnakku and šedu (History B) deep below. But just as an earthquake sometimes flings up material from deep in the earth onto the surface, the reality quake cast up anomalous shards of the previous reality into our past.

CONTINUE ON TO PROJECT SANDMAN